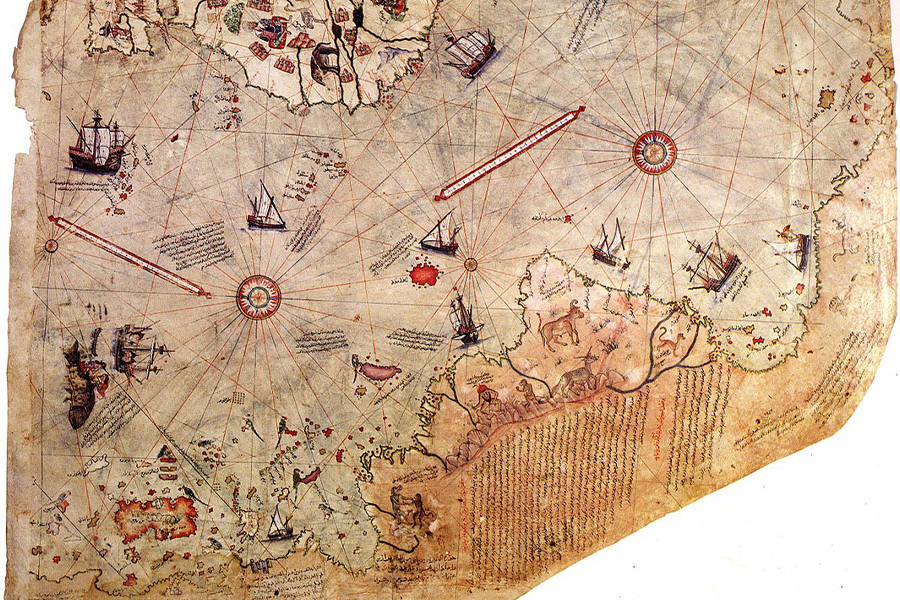 There have been countless maps discovered throughout history that have remained an enigma to both scholars and skeptics. Composed around 1513 from military intelligence by the Ottoman admiral and cartographer Piri Reis, today only around one-third of the map remains in existence.

The ancient map shows the western coasts of Europe and North Africa and the coast of Brazil with reasonable accuracy. Various Atlantic islands, including the Azores and the Canary Islands, are depicted, as is the mythical island of Antillia and possibly Japan.

The map, drawn on gazelle skin parchment, was presented to Ottoman Sultan Selim I in 1517. In the map’s legend, Piri inscribed that the map was based on about twenty charts and mappae Mundi. According to Piri, these maps included eight Ptolemaic maps, an Arabic map of India, four newly drawn Portuguese maps from Sindh, and a map by Christopher Columbus of the western lands.

From Inscription 6 on the map:

From eight Jaferyas of that kind and one Arabic map of Hind [India], and from four newly drawn Portuguese maps which show the countries of Sind [now in modern day Pakistan], Hind and Çin [China] geometrically drawn, and also from a map drawn by Qulūnbū [Columbus] in the western region. 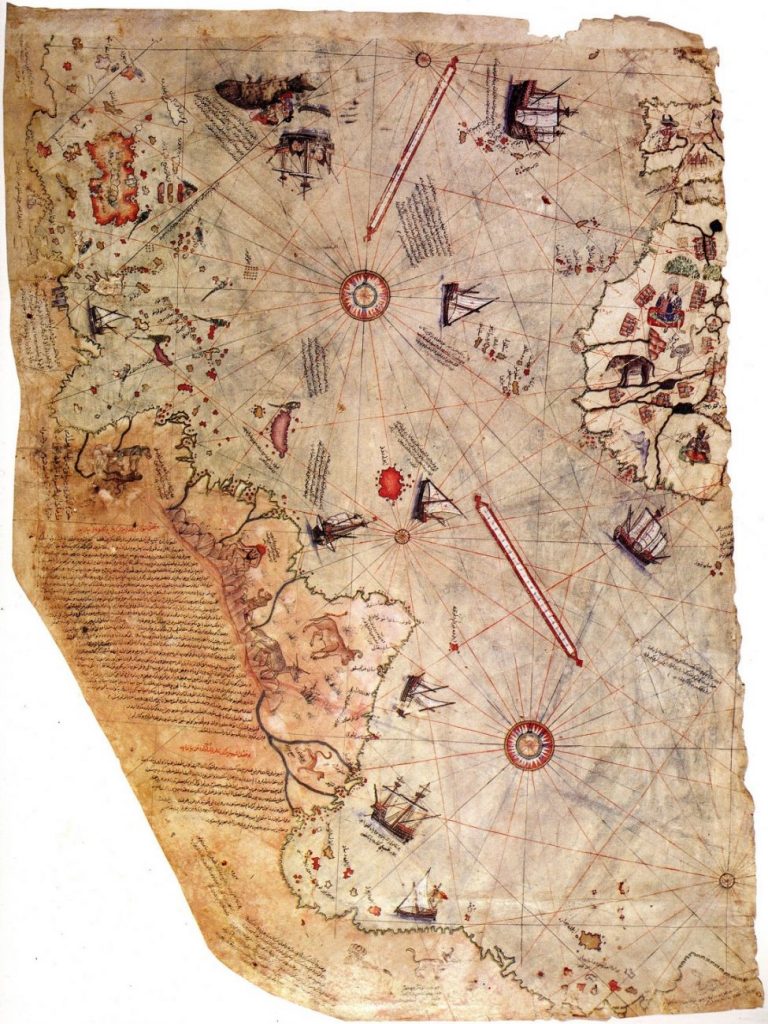 Experts have been unable to understand nor explain the supposed extreme precision of the map. This had led some of them to argue that someone, somehow, must have traveled to Antarctica when it was free of ice.

Today, as noted by authors such as Charles Hapgood, Gavin Menzies, and others, various enigmas remain standing about the Piri Reis map, especially in regards to Latin America and the Southern regions of our planet, as the map supposedly outlines the Antarctic continent, but with rivers and mountains that would not have been visible if the continent was covered in ice.

Today, as much as 98% of Antarctica is covered by ice that averages 1.9 km (1.2 mi; 6,200 ft) in thickness and extends to all but the northernmost reaches of the Antarctic Peninsula. The first exploratory navigation that reached Antarctica was led by British explorer James Cook, who in 1772 and only managed to see snow and ice. This was supposedly 250 years after Pirir Reis had already drawn Antarctica on navigational charts showing the continent free of ice.

In 1819, Fabián von Bellingshausen discovered the landmass of Antarctica for the first time.

In 1950 American expedition Deep Freeze managed to “reveal” the geography of the icy continent.

Professor Hapgood and his students proposed that the Piri Reis map had to have been based on information and charts that were older than 4,000 BCE.

This suggests a time long before any known sophisticated civilizations existed or any well-defined languages were used on Earth. The Piri Reis map suggests the existence of a prehistoric civilization that had the skills and means to navigate the world’s oceans, and accurately chart the lands they visited.

But those who disagree with what Professor Hapgood and other authors proposed indicate there is afar more logical explanation. Those with skeptical views about the Piri Reis map showing Antarctica Ice-free indicate that the map may be a fair representation of South America’s coastline. 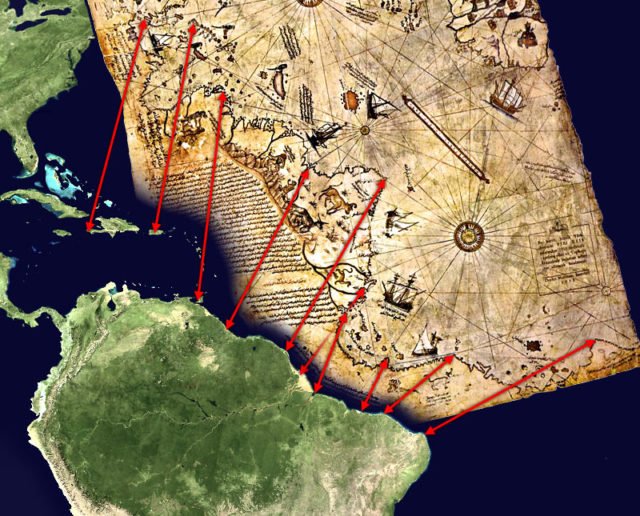 Another less-accepted theory attempts to correlate the American outline map of Piri Reis with coastal Venezuela and Brazil. 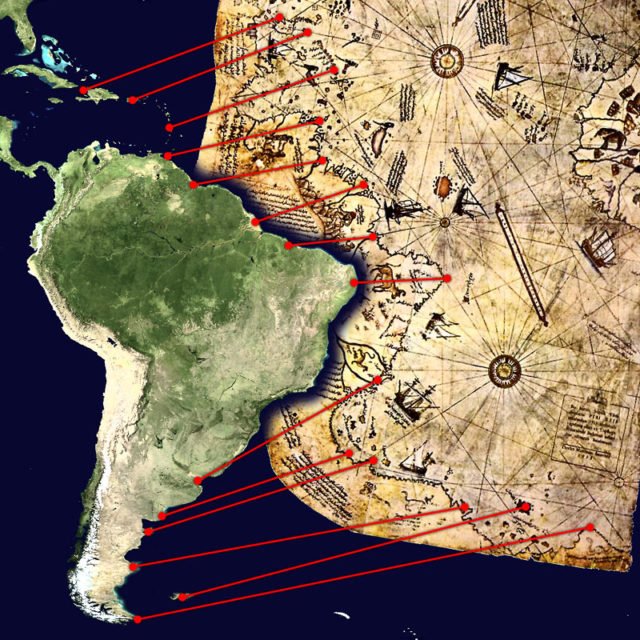 As seen in the above map, other theories attempt to correlate the lower boundary of the Miri Reis chart with the coast of Argentina’s Patagonia region and the Falkland Islands. As explained by Steven Dutch, as far as the accuracy of the depiction of the supposed Antarctic coast is concerned, there are two conspicuous errors.

First, it is shown hundreds of kilometers north of its proper location; second, the Drake Passage is completely missing, with the Antarctic Peninsula presumably conflated with the Western Patagonian coast. 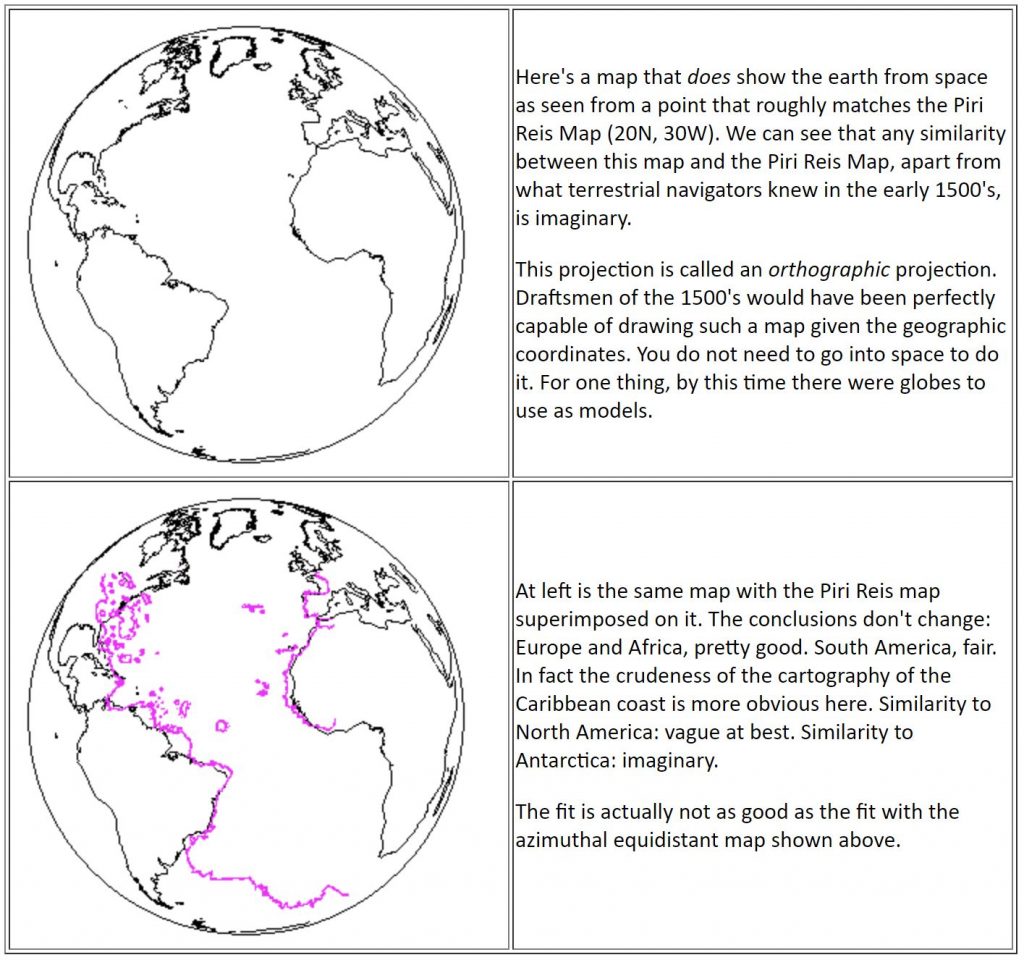 The identification of this area of the map with the frigid Antarctic coast is also difficult to reconcile with the notes on the map which describe the region as having a warm climate. Mainstream scholars maintain that there is no reason to believe that the map is the product of genuine knowledge of the Antarctic coast, nor the belief it shows Antarctica free of ice.

The Piri Reis Map: Does This Ancient Map Show Antarctica Free of Ice?