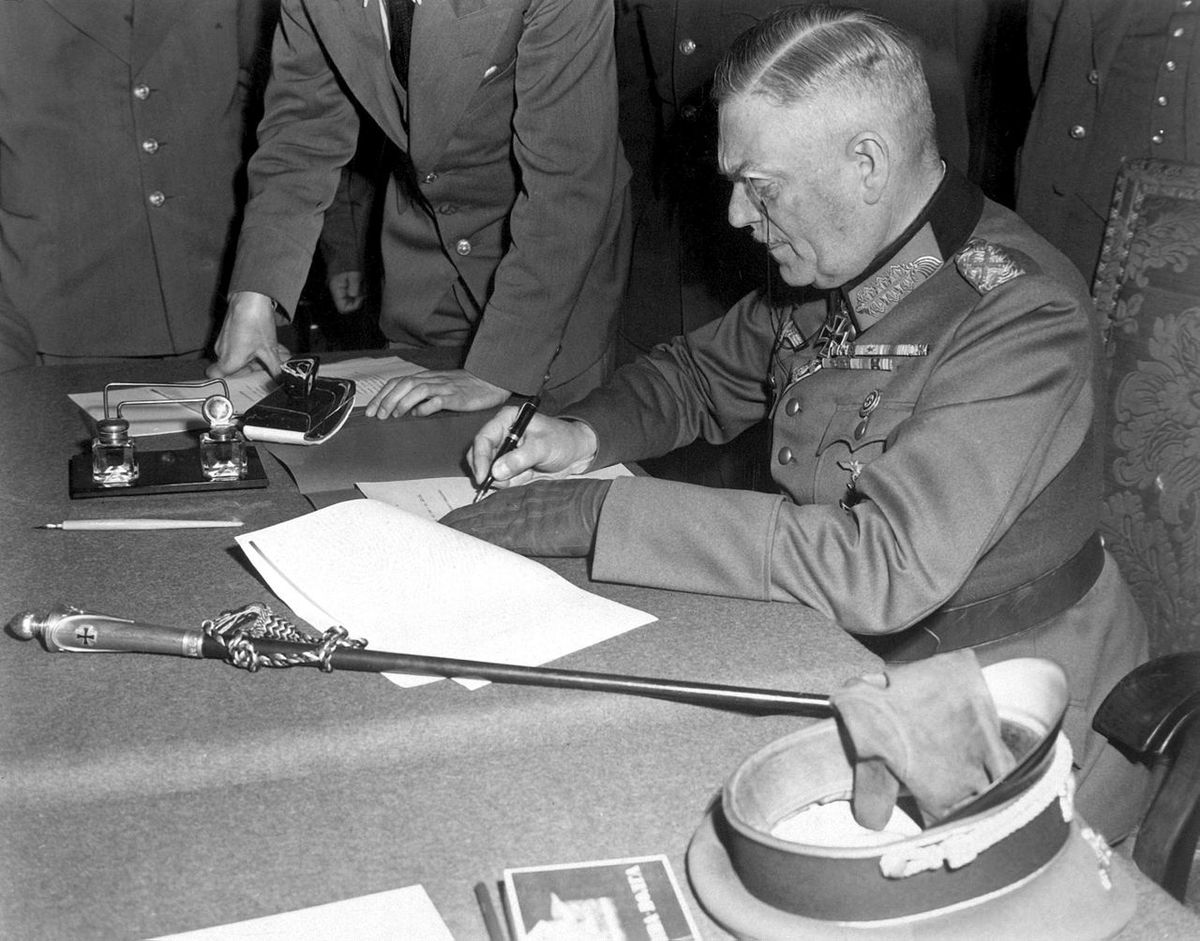 This, however, was unacceptable to the Soviet Union, who wanted a full, final signing in the German capital signed by their leading general, Georgy Zhukov. Dwight D. Eisenhower, the supreme Allied commander, agreed, and the final signing was set for the following day.

On May 8, 1945, Field Marshal Wilhelm Keitel, the supreme commander of all German forces, personally signed the document, the Allies decided to restage the surrender. Keitel headed to Karlshorst, a suburb of Berlin, to sign the document in front of Soviet Marshal Georgy Zhukov and a small Allied delegation.

But Keitel argued a minor point, hoping to add a clause giving his troops a grace period of at least 12 hours to ensure they received their cease fire orders before facing any penalties for continuing to fight. Zhukov ultimately offered Keitel a verbal promise but did not grant his request to add the clause. Due to the delay, the document was not executed until after the ceasefire was supposed to begin—and May 9 had already arrived.

The Russians celebrate May 9 as Victory Day to this day. The Reims surrender wasn’t even reported in the Soviet press until a day afterward, proof according to some observersthat the second surrender was a propaganda move orchestrated so Stalin could claim a larger part of the credit for ending the war. In the rest of the world, though, V-E (Victory in Europe) Day is celebrated on May 8, the day the ceasefire was officially slated to begin.

2. The Victory in Europe also known as V-E Day

The eighth of May spelled the day when German troops throughout Europe finally laid down their arms: In Prague, Germans surrendered to their Soviet antagonists, after the latter had lost more than 8,000 soldiers, and the Germans considerably more; in Copenhagen and Oslo; at Karlshorst, near Berlin; in northern Latvia; on the Channel Island of Sark—the German surrender was realized in a final cease-fire. More surrender documents were signed in Berlin and in eastern Germany.

The main concern of many German soldiers was to elude the grasp of Soviet forces, to keep from being taken prisoner. About 1 million Germans attempted a mass exodus to the West when the fighting in Czechoslovakia ended, but were stopped by the Russians and taken captive. The Russians took approximately 2 million prisoners in the period just before and after the German surrender.

Meanwhile, more than 13,000 British POWs were released and sent back to Great Britain. Pockets of German-Soviet confrontation would continue into the next day. On May 9, the Soviets would lose 600 more soldiers in Silesia before the Germans finally surrendered. 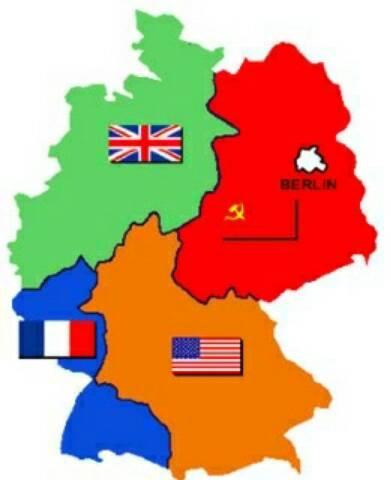 Germany had been a divided nation since 1945. The Americans, British, and French held zones of occupation in Western Germany and West Berlin; the Soviets controlled Eastern Germany and East Berlin. Although publicly both the Americans and the Soviets proclaimed their desire for a reunited and independent Germany, it quickly became apparent that each of these Cold War opponents would only accept a reunified Germany that served their own nation’s specific interests. In 1949, the Americans, British, and French combined their zones of occupation in West Germany to establish a new nation, the Federal Republic of Germany. The Soviets responded by setting up the German Democratic Republic in East Germany.

On May 5, 1955, the American, French, and British forces formally ended their military occupation of West Germany, which became an independent country. Four days later, West Germany was made a member of NATO. For U.S. policymakers, this was an essential step in the defense of Western Europe. Despite the reluctance of some European nations, such as France, to see a rearmed Germany—even as an ally—the United States believed that remilitarizing West Germany was absolutely vital in terms of setting up a defensive perimeter to contain any possible Soviet attempts at expansion. The Soviet response was immediate. On May 14, 1955, the Soviet Union established the Warsaw Pact, a military alliance between Russia and its Eastern European satellites—including East Germany. 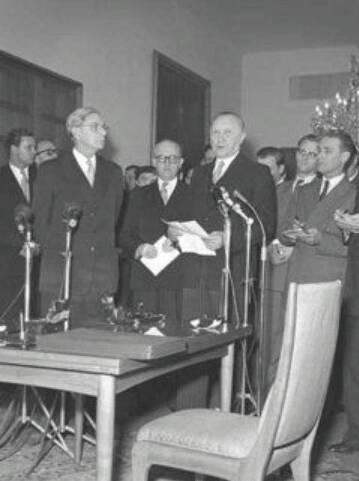 The entrance of West Germany into NATO was the final step in integrating that nation into the defense system of Western Europe. It was also the final nail in the coffin as far as any possibility of a reunited Germany in the near future. For the next 35 years, East and West Germany came to symbolize the animosities of the Cold War. In 1990, Germany was finally reunified; the new German state remained a member of NATO.