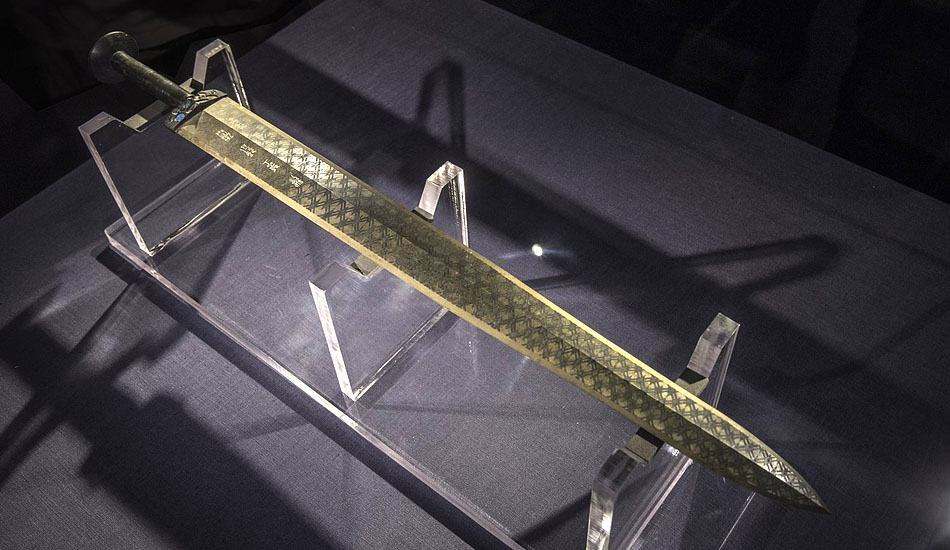 Throughout history, there have been swords that have attained legendary status. In China, the Goujian is one such sword that has amazed scientists ever since it was discovered 50 years back. The sword is more than 2,000 years old. What makes it special is that it did not have a single trace of rust when archeologists first came across it. The blade is still sharp after so many centuries, even drawing the blood of an archeologist who tested its sharpness.

In 1965, an archeological survey was being conducted in the Zhang River Reservoir in Jingzhou. The survey came across more than 50 ancient tombs, recovering almost 2,000 artifacts. A casket found at the site had a human skeleton together with a bronze sword that was sheathed in a wooden scabbard and finished with black lacquer.

One side of the blade had two columns of text with eight characters in total. Archeologists deciphered the six characters as “King of Yue” and “made this sword for personal use.” The remaining two characters were agreed to be the name of the king who owned it. Researchers zeroed in on nine possible kings who could have owned the sword. After about two months of debate, it was decided that the blade belonged to a king named Goujian, who ruled between 496 BCE and 465 BCE, essentially making the sword about 2,500 years old.

The amazing sharpness of the sword was attributed to the ingredients used to create it and the conditions of its storage. “The blade was made mainly of flexible copper. The edge, however, was mainly tin. This allowed the blade to keep a sharp edge for much longer. The sword’s composition, as well as the air-tight fit with the scabbard, probably gave it a better chance at surviving than most other swords,” according to All That’s Interesting. A test showed that the blade can slice through twenty pieces of paper!

In 1994, the sword was loaned by China to Singapore for an exhibition. A workman accidentally hit the blade, which resulted in a 7mm long crack in the ancient weapon. There was a huge outrage over the incident in China and the sword has remained inside the country since then. The blade can currently be viewed at the Hubei Provincial Museum.

In the West, no sword is more famous than Excalibur. It is believed to have been wielded by King Arthur of England, who pulled it out from an anvil atop a stone on a Christmas Eve. The event went on to make him the “true king.” The sword was eventually thrown into a lake at the request of King Arthur on his deathbed. According to legends, a hand apparently emerged from the lake to catch the sword.

In Japan, the Muramasa swords are legendary for the supposed curse that is attached to them. The blades were crafted by master swordsmith Sengo Muramasa, who lived sometime between the 14th and 16th centuries. It is said that he wanted the swords to become “great destroyers” and prayed to the gods. His prayers were answered and the swords crafted by Muramasa came to be known as extremely dangerous.

However, there was one problem — the blades were not only dangerous for the enemies but also the wielder as well. The blades apparently had a dark curse that gave them a will of their own, which made them turn against their owners in case they were not satisfied with combat. An Imperial order eventually banned all Muramasa swords.